I've always been indecisive about the look of it so it might change regularly but I am really happy with having a '.com' I feel all fancy and futuristic. next step Hover board!

It will hopefully also encourage me to draw more. I've been taking lots of lessons in photoshop and I'm looking forward to putting my skills to good use. (mainly drawing robots and dinosaurs but its still worth it)

x
Posted by Tania 'Doodlezilla' Vincent at 18:37 No comments:

My other news this month is i've started writing for Skwigly's online magazine.
After reading the pap I write on here this may suprise you but I promise to put my best authors foot forward.

heres my first article with the wonderful Chris Dicker

Wow its been so long since i've written on here,

lots has been happening but one of the most excitin

g thing is
TREE FU TOM IS ON THE TELLY!!

Its been fantastic to see it come to life over the last year and i'm so proud of the group of people that i've been working with. 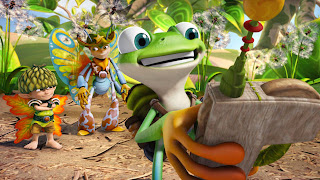 The down side to the show being aired is that it means my time at Blue Zoo is almost at an end but i've loved every second . I think i've learnt about 3 years worth of experience in one year. no one can complain about that :)
Posted by Tania 'Doodlezilla' Vincent at 18:08 No comments: