Scenes I wish I'd animated


As an admirer or all things animated it’s sometimes easy to wish you could put your name to greatness.
Someone recently asked me what I wish I had animated and to be frank, It was a pretty long list.
So I have decided to attempt to narrow it down to my favourite 5 animated scenes.
I am only going with CG today. Mainly because its my field of work but also because 2D and stop motion are even more of a beautiful mystery to me and it was much to hard to narrow them down.
So the scenes I wish I’d animated are:

1.     The Incredibles – Dash, Violet and Mrs. Incredible in the sea after the crash.
This scene makes the list simply for Dash. Dash’s ‘WERE DEAD’ is not only a genius piece of writing but everything about the way he sounds, the way he moves and the build up are perfect pieces of acting. It makes me giggle every time.
Even though there is so much panic in the kids eyes his reaction is still somehow over the top and makes light of the situation. It’s a great way to show they are ok from the crash.
The closed eyes raised head on Dash compared to the anxious Violet is a great comparison.
My brother was a similar age to Dash when this film came out and it is easy to see him reflected in all of his movements.

The water effect on the render and the composition also help to create a fantastic mood in this shot.


I love it. Teach me your ways Pixar! 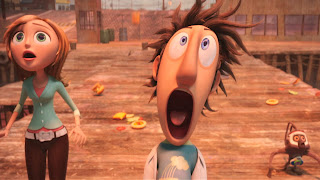 
2.     Cloudy with a Chance of Meatball – (any scene but let’s narrow it to one)
Dock scene, Flint makes it rain burgers.
This film had me mesmerized from start to finish. It makes such bold acting choices without ever alienating its audience. It seems very simple when you watch the animation but I can only imagine the time and effort that went into making these shots look effortless.
This scene lets Flint do what he does best and be Flint. The feet in the eyes is genius. I would kill to get hold of these rigs.
The denial from Flint shown through his closed off body and straight face are animated really well. Steve is just a genius character. His reaction to every situation makes sure to keep audiences laughing. The key poses in these frames are genius with lovely silhouettes. I might have to go frame by frame through this anytime I want to animate some action shots.
When I animate I over animate. I Throw too many ideas at the problem and then try to integrate them all. In this film less is more. The confidence to pause and keep things still is one skill I need in my repertoire.


I can not wait to see the next film. 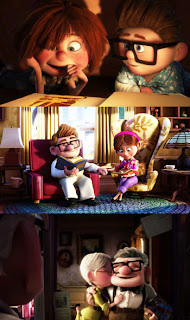 
3.     Up – Ellie meets Karl
Okay so it’s not a shot but more of a 9 minute section of the film but it breaks my heart every time. Even just hearing the music by Michael Giacchino gets me these days.


The colors, the characters and the simple loveliness to this film hurt my animator muscles. I have no idea where you would start animating a woman who’s just lost a baby, in under a minute, without any dialogue. Yet when you watch it on screen you never question how she feels or the pain that’s associated with what she’s experienced. The same goes for so many parts of this film.


Karl placing his hand on hers while they read says more than a 2 hour dialogue could.
Some of the reasons I love this clip:
Karl's cheeky grin after he breaks his leg
The tie to bow tie montage
The way Karl only stares at Ellie when she's told about the baby.
The way Karl makes Ellie belly chuckle while they are driving in their car.
The way Ellie lets the wind hit her face after she loses a baby.
The way Ellie makes Karl giggle when she snuggles in to kiss him.
The way Karl's hat falls off as he drops to his knees to see if Ellie's alright.
The final adjustment of Karl's bowtie in the hospital.
Everything!!!


I would be happy forever if I could create one piece of animation that touches people the way this does. 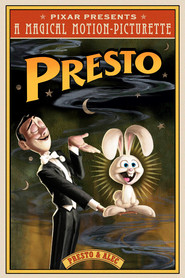 This is a master piece both in timing and story.

The design is fantastic. The concept is simple and the comedy in this is frequent.
I’m a very big fan of music based story. Less words allow for better animation and this slap stick comedy is a hark back to the days of Chaplin.
The introduction of the rabbit is lovely. The use of silhouette and line of action really allows the action to flow. In fact the line of action throughout this film is brilliant (even when the characters are completely broken) the anticipation of every movement from the magician adds the flair for entertainment and is reminiscent of what we expect from a performer.
I’ve framed by framed this animation many times and I still don’t get how it’s done.
I’d kill to see the reference footage they used for this. 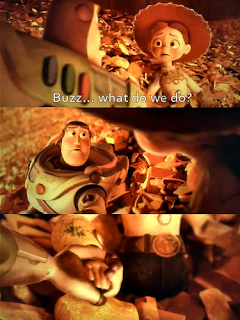 5.     Toy Story 3 – the furnace
This is yet another sad clip but I think that if animation can make you sad it has to be good. If you can make an audience empathies with some spines and verts then you are a genius.
I love films but I pride myself (like a lot of geeky people I know) on being able to spot the plot quite early on. Toy Story 3 shocked me. Yes I realize its crazy but I didn’t see it coming. I couldn’t work out how they were going to get out of this situation and it upset me beyond belief. I had my mum with me who could barely keep it together from the first scene when Andy went to college (my brother was leaving for university at the time) and we both blubbed like children when they headed to their doom.
It might be the post poignant moment of a film. A children’s film full of plans and action suddenly smashed into reality. Up until the point that buzz holds out his hand for Jessie in the furnace you’ve never ever questioned a plan is going to save them. Its Toy Story after all. These characters don’t discuss how to get out of situations, they just do it. Buzz opens a door so effortlessly you forget the physical feats he’s demonstrating.
So to see Jesse’s desperation when she asks Buzz ‘What are we going to do’ to only be responded with a long stare and a look that shows he has nothing left but his hand is heart wrenching. The animator has communicated the line ‘We die’ with a supportive smile and a simple gesture.  In that long pause Jesse understands, accepts and instantly turns to comfort another friend Like every other stage of their lives dying will just be something they do together..
I’m welling up just thinking about it. To present death in such a way in a children’s film is why Pixar is great. They know when to fold and they know when to show their cards. If the story requires the characters to deal with death they will. I’m sure there were many talks with many boards about this topic. Luckily story won out.

Over all these scenes are just shots handed to an animator on a random day, they were thumb nailed, acted out, altered , fixed and changed but once they reach our screens you can only see a story.
I think it’s important to watch animation as if you could achieve it. I can’t right now but I want to and that’s at least the first step. You have to aim for something I suppose or what am I attempting.